Before you begin, please read before installing section.

If you will use PostgreSQL or MS SQL for database, install the database server first.

If you already have one of these installed and are using it for other services, you can use it for ManicTime Server as well.

We suggest you download ManicTime Server Setup (.msi), it is easier to upgrade. Use .zip file only if you want to control where ManicTime files are. You can download it here.

If you used the .zip file, extract to some folder, then run setup.exe to run the setup.

By default, ManicTime Server will use SQLite database, which we recommend you use only for testing or for personal server. If you want to use PostgreSQL or MS SQL, then you need to install chosen database engine before you run ManicTime Server installer. Which database to choose?

During install you will have an option to create administrators. We suggest you create at least one, so that you can then connect to ManicTime Server and make other changes to default settings.

When setup ends, it will automatically run the server and open a browser with a link to the server.

During setup you will have an option to chose a a certificate which is used for HTTPS. Setup will list all certificates, which are in Control panel, Certificates store, under Personal and they have a private key. You can also set a certificate manually, at any time after installation (this also works if you wish to change/update the certificate): Run cmd, as admin, then write

There are two important things:

How to get the hash: 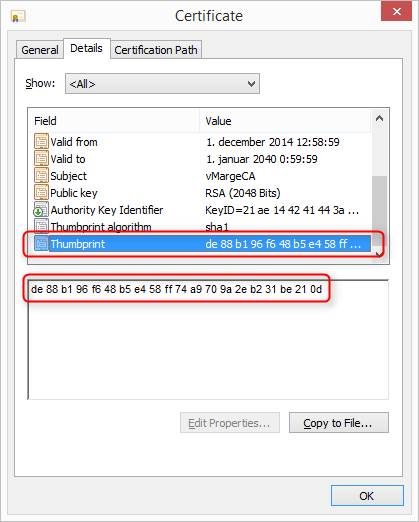 Server has many settings, you can see them all in file

This is just a sample file, the real configuration file is in folder

You can add settings to it like they are shown in the sample file, but the ManicTimeServerSettings.json file needs to be a valid JSON file.

Chances are, you installed ManicTime Server on a machine within your network somewhere. So any device on the network can now connect to it. Local network addresses usually start with 192.16*... Just use the correct IP:port and it should be accessible from any device on the same network.

Making a connection from ManicTime

On Windows, you can also deploy ManicTime via Group policy

How to deploy ManicTime with pre-configured settings