ManicTime will try to extract additional data from the following applications and display it in the Documents timeline:

These are specific plugins written for each of the mentioned applications. We constantly add new plugins, so check which apps are supported in Plugin manager. 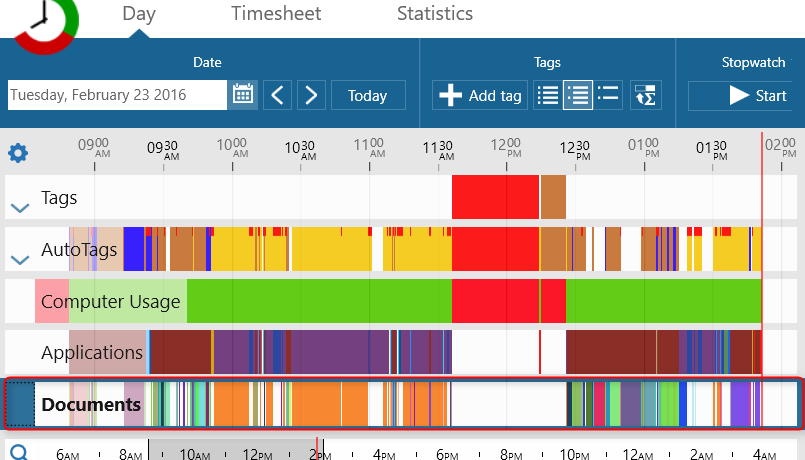 A lot of applications post data about open files and other information in the application title. Let's take Notepad as an example. If you open a document in Notepad, the window title of the application will show up as:
'Some document - Notepad'

The name of the document is included in the title of the application, in this case it is 'Some document'. If we wanted to extract document name and use it on document timeline, we would have to extract the first part of the title.

So what we need to do is, whenever ManicTime detects Notepad, apply some filter which extracts document name from the title.

ManicTime has a plugin which does just that. To use this plugin you need to have some understanding of regular expressions. In this case you can do something like this:

The first part of the rule is the name of the executable, so if notepad's executable is notepad.exe, you just write notepad.

These rules are set in [ManicTime INSTALL folder]\Plugins\Packages\ManicTime.DocumentTracker.CustomTitle\Lib\CustomTitle.txt

You can change the rules there, but we recommend that you add your rules to

If you change it in the installation folder, it will get overwritten next time you upgrade ManicTime. Rules in

will have higher priority than those in install folder and they will not get overwritten with new updates.

When you change the rules, restart ManicTime for the rules to take effect.

These rules will only work on the data collected from now on. They will not work on historical data (you can use Autotags if you would like something similar for historical data).

We removed Outlook plugin from the default installation, because on some machines Outlook constantly shows warnings when ManicTime tries to connect. It should work fine for most users. If you use it, it will show which email you are reading or writing.
You can install it via Plugin Manager.