Always run minimized - when checked, only ManicTime tracker will start, but the main window will not pop up

Automatically check for updates - ManicTime checks our server for updates once a day. To disable this behavior uncheck this option.

Stop stopwatch when application exits - stopwatch can continue running even after you stop ManicTime.

First day of week - select with which day the week starts

This isn't very user friendly and it is almost impossible to know how much you worked on a given day if you normally stop working at 2 AM for example.

Day start shift allows you to tell ManicTime from when to when the day is counted. So for example a day start shift of 5 will display all days from 5AM to 5AM. 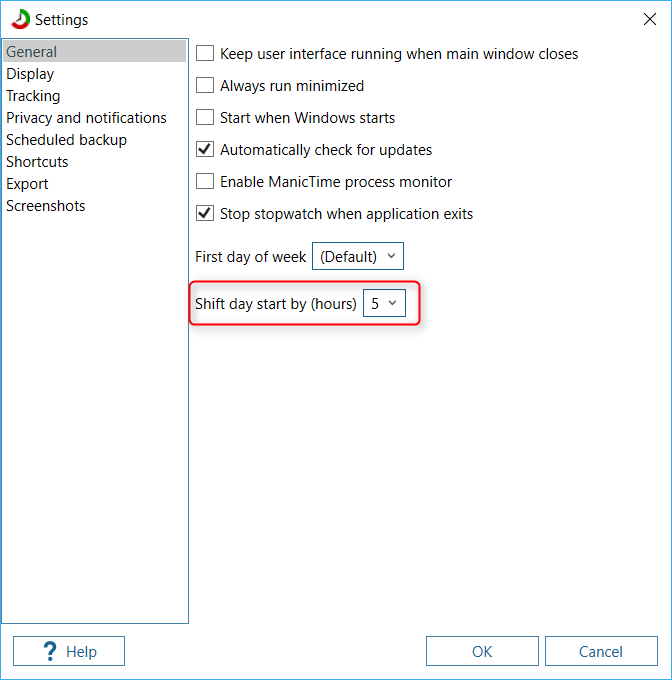 Now the same day pictured above will look like 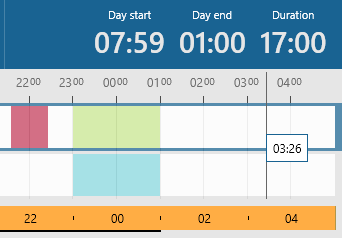 In statistics you would see Meeting 1hrs and Browsing 2hrs for Jun 11th.

Language - ManicTime is offered in a few languages. If you would like to translate it to some other language not on the list, you can read more about it here

Theme - Change the look of ManicTime

Time is marked as Away when:

We recommend you use the first option since "screen saver" method can be unreliable.

Treat sound as active - Away time tracking can be problematic for users who watch a lot of video. The problem is that while watching a video, there is no input from the user so ManicTime tracks that time as Away. When checked, Away time will only be triggered when there is no sound.

Track window titles and documents - When unchecked ManicTime will only track which applications you are using, but not what was in the title of the window. Document timeline will also be empty.

Track private browsing - Privacy mode or "private browsing" or "incognito mode" is a privacy feature in some web browsers to disable browsing history and the web cache. ManicTime will try to figure out if you are using private browsing and it will not track the usage if this is unchecked. We test private browsing in Firefox, Chrome, Opera and IE. Other browsers might work, but are not officially supported.

Tracking schedule - By default, ManicTime will track usage all the time. This option allows you to restrict ManicTime tracking to specific hours.

Do not track all... - You can set ManicTime to not track specific applications, web sites or documents. You can also set it to stop tracking when specific word is in title.

By default, ManicTime tracks applications, which are in use for more than 5 seconds. So if you quickly switch to one application and back to the previous one, ManicTime will not pick this up. Extending this  interval means that the captured data is not as accurate, but ManicTime generates less of it.

Number of Recent tags - how many tags will show up on dropdown menu on Day view, after you select some time (number of tags in the image below). 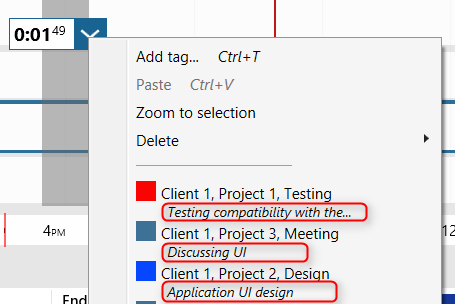 When new tags overlap with existing tags -  this setting will be used, when transferring tags from autotags or when using Advanced search for tagging

Show icon - when unchecked, there will be no ManicTime icon in the system tray even though it will be running in the background. You can open the UI by clicking on the ManicTime in Start menu (same as if you want to start it)

Show notifications after away - even though ManicTime provides you with a lot of information about your computer usage, it doesn't give you any clues as to what you were doing while Away. This could be a problem, especially if you tag your time at a later date, since you can often forget what you were doing at some time.
If you check this option ManicTime will display Add tag window upon return to your computer and you can quickly write a tag which describes your actions while Away. Depending on the setting ManicTime will either display Add tag dialog or just show a hint near the icon in the system tray.

Don't show Away view if stopwatch is running - Usually when you use a stopwatch you are already working on something, so the Away view you receive when coming from inactivity is unneeded.

When windows is unlocked, always show Away view - When this is checked, Away view will always be shown even if the away time is only a few seconds long.

If Show icon is unchecked, notifications for Away time are not displayed.

You can schedule a backup of the database. If ManicTime was not running at the time the backup should be created, it will create one next time it is started. You can use "Backup now" button to test the settings.

Choosing which data to backup

For scheduled backup we suggest you only backup ManicTimeCore database. You can of course also backup ManicTimeReports and screenshots, but it will increase the size of the backup.

Global shortcuts allow you to define a system wide shortcut to start actions within ManicTime. Currently you can define shortcuts for the following actions:

To set a shortcut: click on action to select it and click Assign. To set CTRL-ALT-J for example, press J while holding down CTRL and ALT. 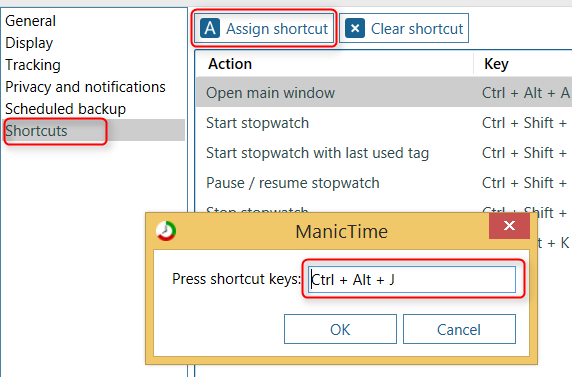